For years I was a BlackBerry fanboy. I remember snatching a departing colleague's 6710 and lying to the IT department that I was authorised to have my email on my phone. I never looked back. Despite a brief flirtation with the Nokia N95 - I was a BlackBerry Boy through and through. Until this happened. 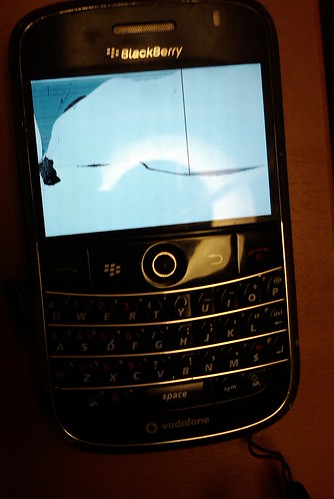 In early March 2010, my beloved BlackBerry Bold took a tumble out of a cab and died. I've been an Android man ever since. Magic, Hero, Nexus, Galaxy - all great phones, but none could hold a candle to the 'berry.

Or so I thought.

A Torch In The Night

A good friend of mine - who updates his phones as frequently as I do - offered me his discarded BlackBerry Torch. How could I refuse a chance to get back to a real phone?

The main thing that was bothering me about Android was the lack of a physical keyboard and the general instability of the platform and radio software.

The Torch is a phenomenal BlackBerry. The action on the slider is exquisite. The keyboard is a joy to pound away on. The email and calendaring are rock solid with a powerful and practical UI. The browser has improved immeasurably. The range of apps is much broader than a year ago - and includes the all important trifecta of Foursquare, Dropbox, and Expensify.

And I hate it.


Everything That's Wrong With The BlackBerry

There are some minor niggles - that's fine - you get them with every phone. But the Torch has some fundamental flaws which, in my opinion make it unsuitable for day-to-day use. They are as follows.

The handset itself isn't particularly pricey compared to other smartphones - but the cost of extra services is extortionate.
For the first day, I couldn't work out why I wasn't able to get any email - then I realised, you have to buy a special BlackBerry data plan in order to get email and Twitter. What the...?

I just don't get it. Ok, it's only an extra fiver a month but... for what? My Android and Symbian devices don't need a magic data plan. The Sainted iPhone has many precious qualities - but it doesn't care what price plan it is on. Data is data is data! Why is BlackBerry any different?

Then, I realised that I couldn't get my work email through. This hadn't been a problem on Android - I just clicked on "Microsoft Exchange ActiveSync" on the device and my Calendar and Email were all set. Want that on a BlackBerry? That'll be an extra £28 per month.

WHAT THE JUDDERING FUCK?

I understand that BlackBerrys use some weird VooDoo to connect to the Interwebs and have mail sent to them faster than a speeding bullet. But is it necessary to spend an extra £336 a year on them? No.

It seems every time I uninstall an app, or add an email account my phone wants me to reboot. The BlackBerry is famed for having a "suspend" function - when you switch it off, it just goes to sleep and can be woken instantly. Something Android would do well to copy.
But for cold restarts, it takes a bloody age.
What makes it worse, is that official advice after provisioning the service is to pull the battery out, wait a minute and put it back in again. It's not the easiest thing in the world to pull a battery out of a handset on a crowded train.
I'm not the biggest fan of Apple - but they've got some things right. If your platform needs constant reboots - you've failed. If your hardware regularly had to be disassembled - you've failed.

Network coverage is always variable - that's a given. But BlackBerry adds another complication into the mix. Sometimes I can have perfect data reception and still not get any email! Why? Because the phone has lost connection to the BlackBerry mothership.

I don't know if this is the fault of my network provider, the BlackBerry servers, or the handset. I don't much care. It doesn't work.

Again, I don't have this problem with any of my other phones.

This is coupled with the radio's obsession with 2G. I can be in an area of perfect 3G coverage and the radio will still lock on to 2G. Restarting the radio usually wakes it up and it can find 3G - but I'm reliant on speed; I can't spend my life in the radio settings menu.

I've been using BlackBerrys since the black and white days. I'm now running the very latest 6.0.0.448.

Despite the marketing hype, there's no practical difference between OS6 and OS5. The kinetic scrolling is adequate - but slow. The browser renders better - but is slow. App world has more functionality - but is slow. The range of apps is great - but they take ages to start up. The camera has more mega-pixels and a bunch of great focus modes - but it's slow to start, slow to focus, and slow to take pictures.

I get that this isn't a multi-gigahetrz device. But it crawls along like an old Nokia.

I think the comparison is apt. BBOS is, now, as out-dated as Symbian and just not fit for the modern age. While I hope RIM don't got down the WP7 route - they need to move their next generation of handsets to their QNX platform. The BlackBerry OS is highly practical - unless you want to work with any sort of speed.

Those are the big ticket items. The ones which ensure that on Monday I'll be on the search for a new phone. Here are the minor annoyances.

The screen isn't AMOLED. After spending a few months with an AMOLED screen, there really is no going back. Blacks and blacker, colours are more vivid, they're easier to read in sunlight, and they dim down to a level that's easy to read in the dark.

The "answer" and "BlackBerry" keys are on the same plastic button.

It's one of those design flaws which really grates after a while. A simple dividing line would make unsighted use of the buttons so much easier

The letters on the OSK don't change chase when you hit the shift key. That's really annoying. Added to the fact that the OSK just isn't as precise as other keyboards really lets the phone down.

I'm not sure if this is the fault of Almighty Google - or RIM, but when I sync my contacts, their photos don't come across.
I've got a dreadful memory, so I've spend ages making sure each of my contacts has an image associated with them. Compare and contrast...

Bloatware has always been a problem on mobiles. The annoying pre-installed software which you can't delete. BlackBerry is better than most, in that it will allow you to delete some of the crap - but not all.

Most annoying is the podcast app - mostly because it doesn't work in the UK. Why pre-install something that won't work? More to the point, why is a simple podcast downloader region locked?

A special mention to Vodafone UK for continually pushing out service books for the (discontinuted) Vodafone 360 service, and the non-working Poynt service - even in the face of hostile customer feedback.

There are a few great points about the BlackBerry that make me sorry to see it go.

Paying an extra £28 per month for a device which is no quicker at receiving email than my Android? No thanks.
When RIM rejoins the real world and realises that it doesn't own the push email market any more - and can't charge like it's the only game in town - I'll be back.

For now, it's off to find a phone with a great physical keyboard and good battery life.

I don't know yet - but at the moment, the BlackBerry platform has lost its way - and I'm not making any more compromises when it comes to my phone.

7 thoughts on “The Death Of The BlackBerry”