((Work In Progress - still need to add pics, videos and links))
Yesterday, myself and a few hundred other bloggers, geeks, marketing droids and other social media maverns descended on Wallacepace St Pancras for the inaugural Social Media Camp London 2008.

This is just a quick post to say what I did, what I liked and what I thought could go better,

First off, enormous thanks to Vero for single handedly organising the whole shebang. Her Whuffie must be through the roof by now. The venue was fantastic and - perhaps a first for a BarCamp - the food was freshly cooked and delicious.

There were around 150 participants - many of whom I'll name check - all of them interesting in their own special way. It was great to meet technology writer (and fellow log-haired scruff) Bill Thompson.

Our rampant twittering pumped us to the top of the twitter trends for the day. You can find all sorts of digital footprints from searching for our tag #smclondon

So, on to the sessions I attended. 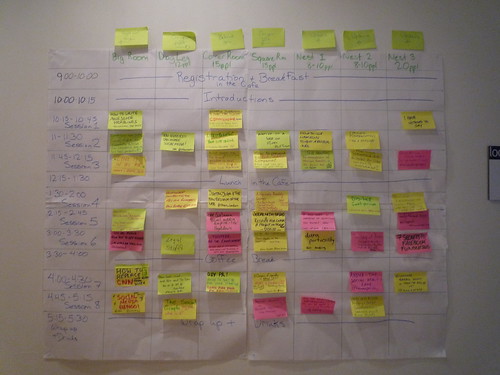 1) "I Have Nothing To Say".
Someone -I have no idea who - put up a session called "I Have Nothing To Say". I think they meant it as a joke - because no one turned up to say anything. So, being the extrovert that I am, I moderated a session on why people abandon their blogs (via an unsuccessful attempt at why women don't speak out more in technology - see Suw's posting on the subject).

We looked at what reasons people have for starting to blog and what prevents them from blogging. It's often a time constraint but - more often - it's the fear that nothing one says will be of interest.

We looked at a few semi-abandoned blogs that participants had started. Zoe from Girl With A one Track Mind, talked about her anonymity being blown and the effect that had on her blogging. Annie Mole talked about the pressure to write on Going Underground and how she sometimes feels constrained by her subject matter from venturing into other areas that interest her. ((I'll try and put up the other blogs as I remember them!))

For me, there's a clear divide between writing in order to attract an audience and writing to satisfy a creative itch. I think my blog falls into the latter camp. I'm hugely gratified when people read and comment - but it exists primarily as a way to get my thoughts out of my head. That some of those thoughts might has a positive affect on others and perhaps change the world is, to me, a fringe benefit.

It has inspired me to keep this blog going. I'll try an put more of my thoughts down in long form rather than just 140 Character brain dumps on Twitter.

I'd like to thank whoever placed the topic up there. It really helped me warm up for my presentation and I think all the participants found it a useful discussion. I want to reiterate it wasn't my idea or session!

2) "Social Media Activism"
This session focused on Miro and its role in activism. An interesting session which showed off some of the reasons behind the software and how it is being used. While interesting, I would have appreciated a bit more focus on how and why.

It will be interesting to see if "counter culture" ever breaks in to the mainstream. We're now seeing User Generated Content popping up in the news - but it's only in terms of footage from an event. I hope it's not too long before commentary can become part of the discussion.

3) "How To Present To Big Scary Companies* *And Look Like You Know What You're Doing"
My presentation! I was lovely to see so many people turn up. Some kind soul has done a write up of my presentation. I'll write a full blog post in the next few days expanding on some of the themes.

Critically, I over-ran and didn't cover some of the points that I wanted to make. I'm also worried that I didn't create enough discussion in the room. Some of the best sessions I attended were discussions lead rather than presenter focused.

I'll let the other attendants have their say about me - and I'll link to them from here if I find any!

However, it was great to teach a new group of people my favourite tongue-twister "Peggy Babcock"

4) "Alternate Reality Games"
Hosted by Miss Geeky - AKA Melinda Seckington this was a fascinating look in to the ARG phenomenon. I'd seen things like the Heroes ARG but I'd never really been bothered to play. I thought they'd take up too much time and would be to US focused. This presentation really opened my eyes to how much fun they can be.

I'm a little worried that most of them are - at heart - marketing campaigns. I get a fun game to play in return for being marketed to and becoming a marketeer for the product. It's a reasonable trade-off, I suppose. Not much different from getting a free TV show in return for watching adverts.

5) "Managing Your Online Reputation"
Vero's presentation was well attended. It started with the rather brazen assertation that "Your CV Sucks!" It's true. Your CV only shows a fraction of your life. If future employers (or friends) want to know you better - they're heading off to Google, Linkedin, twitter and facebook.

As with all good sessions, this rapidly became a heated discussion. Should we teach children digital literacy - or will they teach us? Does seeing a picture on facebook of a potential employee drunk, taking drugs, misbehaving at university colour your judgement? If you post about your sexuality - or any other subject - can it land you in hot water?

Again, I have so many things to say about this, it might become another blog entry!

6) "Social Media - How Not To Get Fucked"
Zoe from Girl With A One Track Mind gave a brief presentation about what it was like to lose her anonymity. While I generally like presentations that turn in to discussions - I really would have liked to have heard more from Zoe about how she coped with - as she put it - getting fucked.

That said, it was fascinating to see how people perceive their digital identities as - contrasted with Vero's talk - how they compartmentalise them. The ramifications when those compartments break down was also a subject of interest. As some bright spark put it, the reasons weddings are so traumatic is that you have your friends, your family and you colleagues all in one place. Those compartments totally break down and - in extreme cases - can become toxic.

7) "6 Degrees of Separation - Now 3"
Ben gave a high level overview of FOAF, it's implications in the semantic web and social media. It was great to see a "techie" talk. Well put together and with an excellent interpretation of Dunbar's Number.

8) "Social Media Bingo"
A litt
le bit of fun for the end
of the day. Slightly chaotic and disorganised - but that may have been part of the charm. The highlight was the projector screen showing the tweets of participants.

Overall, the day was fantastic. The only criticisms I'd make is that the venue wasn't wonderfully accessible for those with mobility issue (or, in my case, the plain lazy). It might have been nice to stick a copy of the day plan in each room, just so people didn't over-run their slots and participants knew where to go without crowding round the main board.

Also, I should have won the year's free Sky HD. ;-p

Too knackered to write anything else. The day was a roaring success. It's great to meet new friends.