I’ve written before about Dabr, the Twitter client I code for. Dabr helps people around the world and is used by some of Twitter’s most influential users.

On last night’s Newsnight, as part of a package on Ai Weiwei’s release, they showed him using Twitter. Here’s a screenshot. 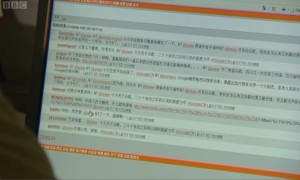 That’s Dabr! I’d recognise the orange colour scheme anywhere! It looks like he’s using one of the many hundreds of installs of Dabr – this one looks like it has been localised to Chinese.

One interesting thing, none of the user’s avatars appear. That’s because, at a guess, the images are retrieved from Twitter’s servers which are blocked by the Great Firewall of China.

Indeed, if we zoom in on the text we can see the letters “GFW”.

My Mandarin is too rusty to translate the rest – can anyone else help?

So, looks like my next addition to Dabr will be to use an image proxy to ensure avatar images make it through China’s firewall!