I don’t want this to be seen as an anti-Microsoft rant. I’m a great fan of Windows Phone 7, my Microsoft 4000 keyboard is the only device I’m comfortable typing on, and my Xbox hardware is still going strong years after release. I’m also heartily impressed with Microsoft’s continuing support of the Creative Commons. True, I don’t use Windows at home – but I don’t blindly devote my life to knocking them unfairly.

But I do have serious concerns about Microsoft’s attempts to enter the 2D tag market. While talking about QR Codes on Twitter, the Online Community Manager for Microsoft Tags sent me this message.

@PongrMedia @edent have you checked out Microsoft Tag? You can make some pretty cool custom designs http://ow.ly/i/5Ljk

It seems that Elliot spends his entire time trying to convince QR users that MS Tags are the next big thing. But are they really? Not everyone is convinced. I’d like to take you through why I think that Microsoft’s tag strategy is misguided and why you should avoid using them. 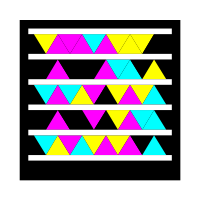 I’ve spoken before about the perils of indirect codes. Essentially, an MS Tag contains just a number, the reader then has to connect to the Internet, query Microsoft’s servers, then return the information to you.

This is worse than a QR code and raises the following questions:

One positive feature of using an indirect code is that you can update the destination information. You can log on to Microsoft’s servers and point your code at a different URL, that way, you don’t need to reprint your tags.
Of course, you can do this with a QR code as well! If your QR code points to example.com/ScanMe – all you need to do is update your .htaccess file to redirect the scanner to a different page.

Controlled By a 3rd Party

With a QR code it is you who are in control. When you relinquish that control, you open yourself up to a world of uncertainty.
Take a look at these two clauses from the Microsoft Tag Terms of Use

we may change this Agreement, the API or any Service at any time and for any reason, with or without notice. Such changes may include removal of features, addition of new features or the requirement of fees for previously free features

So, once your MS Tag is getting a few hundred scans a day, Microsoft can send you an email saying

“Nice campaign you’re running there. It would be a pity if anything happened to it. Shall we say $10 per scan?”

Or, take a look at this fine piece of legalese.

THE API AND SERVICE, INCLUDING BUT NOT LIMITED TO TAGS AND REPORTS, ARE PROVIDED “AS IS” WITHOUT WARRANTY OF ANY KIND. MICROSOFT AND/OR ITS RESPECTIVE SUPPLIERS MAKE NO REPRESENTATIONS ABOUT THE SUITABILITY, FUNCTIONALITY, ACCURACY OR AVAILABILITY OF THE SERVICE OR TAGS, OR THE INFORMATION CONTAINED IN THE DOCUMENTS, REPORTS AND/OR RELATED GRAPHICS PUBLISHED AS PART OF THE SERVICE OR IN CONJUNCTION WITH ANY TAGS FOR ANY PURPOSE

Now, I know that all services disclaim liability. But a QR code isn’t a service. It’s a specification. No one can suddenly revoke it. It will never stop working because a company goes out of business or simply decides to retire a service.

This isn’t a trivial point. A QR code works best in black and white – but you can use colours if you want. MS Tags require a complex colour printing process. That’s expensive if you’re printing out fliers, photocopying leaflets, or simply ordering business cards.

You can hack MS Tags to make them readable in black and white – but it’s not officially supported.

I’ll agree that the basic QR code is nothing much to look at – but that doesn’t mean you can’t make them as visually interesting as MS Tags if you want.

I’m a big fan of Windows Phone 7. You would think it would be natural to ensure that every WP7 device has an MS Tag reader. I asked Oded Ran, Microsoft UK’s Head of Consumer Marketing for Windows Phone, if that was the case.

@edent no, it doesn't come pre-installed.

I understand better than most the realities of bringing a device to market. It’s a constant battle over which features have to make the cut. It just seems odd to me that Microsoft didn’t insist on a tag reader to be installed. True, there are readers available in the Windows Phone 7 app store – but it strikes me a glaring omission not to capitalise on the new platform. The MS Tag reader wasn’t even available at launch. I’m sure Microsoft have a high level of confidence in both platforms, but it’s a worrying gap.

While Microsoft claim that they’re available on more phones than other readers, I find that hard to believe. What’s more, because the code is proprietary, you’re once again reliant on Microsoft to release a reader for your platform. If MS makes a business decision not to support, say, Bada, you literally cannot reach those customers. You can see the full list of supported phones at http://www.gettag.mobi/ – Bada isn’t on the list – and there’s no indication of when or if it will ever be available.

Once again, the open standard wins through. Readers can be created by anyone for any platform.

It’s pretty cool that MS Tags can be merged into images like these.

But how do you let users know that it’s a scannable image? You either need an extra graphic or text explaining which image can be scanned.
A QR code has a distinct look which is easy for a customer to recognise.

It’s hard introducing a new technology to a crowded marketplace – but once again, Microsoft haven’t done themselves any favours with developers. The MS Tag support portal is eerily quiet and littered with unanswered questions.
True, there is only a small team working on this – but it still strikes me as a bit of a half-hearted effort.

QR Codes are an open and published standard (ISO/IEC18004). There are no patent or royalty fees to pay. Ever.

I struggle to see what MS Tags bring to the party. Their one strength – their attractive multi-coloured nature – turns out to be a considerable weakness in terms of cost to print and longevity. What happens when those colours fade in the sunlight?

Everything else about them strikes me as a huge risk. A closed proprietary standard which exists solely on the whim of Microsoft. At any time Microsoft can turn it off or start charging you money for campaigns which are already live. Those are two huge risks which simply aren’t present with QR codes.

Think I’m wrong? Please let me know in the comments below.