The argument over the nano-SIM is a distraction. It's a sleight of hand designed to catch the industry off guard and fool it into doing something really stupid.

The SIM is designed to do a number of things; encryption, address storage, hold SMS, etc.

Most importantly, it's designed to be swappable. With GSM, you can choose your phone and your network provider separately. Want the iPhone? Hate Three's network? Stick in a Tesco Mobile SIM. Love Vodafone? Think their range of phones is crap? Buy the phone and service separately.

It means carries and manufacturers don't have control of customer behaviour. This is a good thing and allows our form of free-market capitalism to flourish with increased competition.

The reason that Apple claim their iPhone needed a micro-SIM was that the space inside the iPhone was too cramped for a regular SIM. This is hogwash. 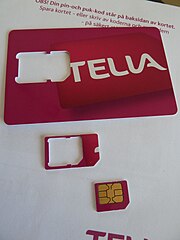 The size saved by the mico-SIM is miniscule. It was originally intended for small or embedded devices where space was at a premium. While the iPhone is a complex bit of kit, the SIM tray is already close to the size of the full SIM. It's simply not credible that the iPhone was unique and had to have a new SIM.

So what was the purpose?

Apple want to control the entire experience. You buy the Apple iPhone in the Apple Store. You download music and games from Apple's iTunes. You send messages over Apple iMessage and Facetime. They want a 100% Apple experience.

When the iPhone was limited to a single carrier per market, they also had that control over the networks. They could (and did) dictate how much the monthly tariff cost. How many minutes, texts, and MB an iPhone user would have. They even prevented the phone being sold to PAYG customers.

You may have thought you were on O2, but you were really on an Apple MVNO.

That has (mostly) changed now. You can get an iPhone and put it on any network, at any price point, with any services and wrest control from Apple. And they hate losing control.

The micro-SIM was their first move. Use a SIM which cannot be swapped with any other phone. Make it hard enough to get a normal SIM into an iPhone that most people won't bother. Yes, there are SIM cutters and caddies - this is an imperfect solution they foisted on to the marketplace. One which is backfiring as other manufacturers start using the micro-SIM.

Their next move is a phone with a "Virtual SIM" - Tomi Ahonen has a little bit of background - no physical SIM card to be swapped.

It's quite simple technically. You buy your iPhone, plug it into iTunes, and tell it which price-plan you want. You pay Apple directly and they update the iPhone's "Virtual SIM". Hey presto, you're on the network.

What network? Who knows! As far as you're concerned, you're on Apple. It may be Vodafone, it may be O2. And, at any moment, Apple could update the Virtual SIM and you'd be on T-Mobile.

I've Got A Bad Feeling About This

There are several reasons why the Virtual SIM is a dangerous idea.

Luckily the operators kicked the proposal into the long grass. But I know that several parties are interested in Virtual SIMs - it's a zombie idea which will keep coming back unless we kill it with fire.

This is terrible for customers - but you can see why Apple love it so.

I've used Apple as a convenient scapegoat here. They're not the only ones planning for a virtual SIM. In some ways, the Amazon Kindle was the first to try this strategy in the UK. As I've blogged about, the Kindle has a non-removeable SIM card. Well, you can remove it if you're handy with a screwdriver and don't mind voiding your warranty.

In this case, Amazon have an exclusive deal with Vodafone to provide worldwide 3G roaming on their network. If the SIM was replaced, the customer would have to pay the roaming bills.

The Kindle can only work with Amazon's services - all the browsing goes through their proxy - but that doesn't necessarily mean that it couldn't use a 3rd party SIM card. If you've no Vodafone reception or WiFi at home, it may even be worth your while paying O2 for a data-only SIM.

But the Kindle is sold as a single service. So it's acceptable. Barely.

I dread the future where devices are locked down like American CDMA phones. No choice other than what the manufacturer demands. Gone will be the days of choosing the right phone and the right price-plan. You'll take the service you're given and will have to put up with it.

For now, the operators are on the side of consumers against manufacturers. But it only takes one to start us down that slippery slope.

27 thoughts on “The SIM-less Phone Is Coming. And It Should Scare The Shit Out Of You”