As part of my MSc, I'm being asked to think about "digital disruption" - so here are some personal thoughts about the future of transactions with the state. The UK Government has a lot of APIs to let computers communicate with each other. Most of them are department-to-department.

For example, the Ministry of Birds wants to get an updated list of incidents from the Department of Avian Accidents and Catastrophes. So it gets the information from api.daac.gov.uk

But some APIs are human to Government. (I say "human" because not all users are citizens, and some users are businesses.)

At the moment, if you want to to Record a Goose Sighting to the government, there are a few things you can do:

Well, that web form POSTs data to an API. So what if the Goose Spotting API was opened up?

Anyone could build an app which submits data to the government. Perhaps no-one wants to download a specific Bird Spotting app - but what if Nintendo build it into Pokemon Go? Now, when you're running around capturing digital beasties, you can also submit Geese!

What about more personal stuff? HMRC has a bunch of APIs. Your accountancy software can download the latest tax rates and submit tax returns on your behalf.

What happens when the entire state is an API?

In the future, it is possible that every transaction that the state can have is an API. Apply for a Goose licence? That's an API. Check if a licence is valid? That's an API. 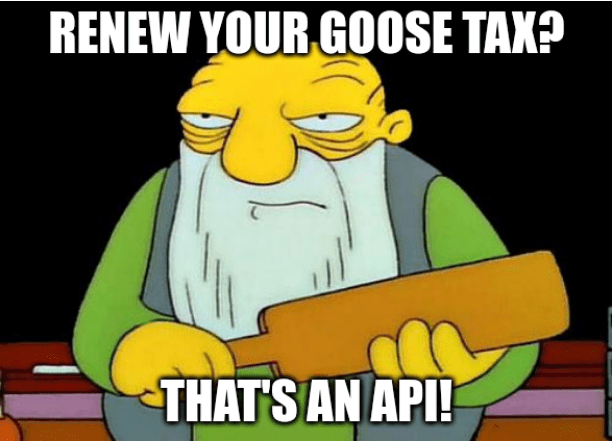 At which point we need to have a difficult conversation. Government is a monopoly provider of certain services. You have to use the GOV.UK website to perform certain transactions. The GOV.UK website is great (and award winning) but it soon won't be the only game in town.

Perhaps brilliant new services will appear which combines multiple Government and private APIs and services into a single convenient app?

This isn't a strictly new problem. If you've ever applied for a visa for a foreign country, you'll know there are companies which specialise in applying on your behalf.

If you've purchased a property, your conveyancer acts as an API between you and the Land Registry (and various other organisations).

But we're rapidly heading to a moment in time where everything will be API driven. At which point the State as the primary interface to State services becomes disintermediated.

How do you maintain quality control over 3rd party software? Permissionless innovation is great - until it hurts people.

Can you trust that snazzy new app to submit your data correctly? Who is liable when Spotify accidentally revokes your passport?

Why bother creating a great first-party experience when third-parties will do the hard work for you?

What happens when the government of Ruritania decide to offer UK Government services through www.guv.rr with a much better user interface? Does Ruritania gain an advantage by knowing what UK users are doing? Can they upsell Ruritanian citizenship?

These are all deliberately extreme and provocative examples. I hope that the API future brings efficiencies and makes life easier and simpler for people. But I have a nagging suspicion that there will be some unexpected side effects.

Things are about to get interesting.

One thought on “Disintermediate The State”