In it, he speculates on what would happen if The Tower of Babel were completed. For those unfamiliar with the legend, it tells of a people who tried to build a tower tall enough to reach the heavens. The book talks about the people who live partway up the massive tower, unable to comprehend what life is like for those living on the ground.

In Chiang's tale, he mentions that it takes a cart laden with bricks several months to reach the top of the tower. And empty, lighter cart takes a month to make the opposite journey.

Being a short story, it doesn't delve to deeply into the workings of life at the top of a tower, but I thought it would be a fun exercise to think about what life would be like with such an asymmetric gap between sending and receiving a message.

Throughout most of human history, communication times have been roughly symmetric. It takes the same time to send a message from London to Edinburgh as it does to send a reply from Edinburgh to London.

Even in the Age of Discovery, when Europeans went pillaging the rest of the world, travel times were fairly consistent - albeit sometimes disrupted by storm, snow, or other natural disaster.

Our communications with Mars may have asymmetric bandwidth - but the latency in both directions is only limited by the speed of light. Well, that and how often the planets can see each other.

What would data transmission be like from the top to the bottom of this great tower?

Were the tower to be laid down across the plain of Shinar, it would be two days' journey to walk from one end to the other. While the tower stands, it takes a full month and a half to climb from its base to its summit, if a man walks unburdened.
Tower of Babylon by Ted Chiang

For simplicity's sake, let's assume that the average person can walk a Marathon in a single day. So this tower would be around 84Km tall.

In 2015, Alan Eustace completed a stratospheric jump from 41 kilometres in around 15 minutes.

We can conclude that any message dropped from the top of the tower would probably take less than an hour to make an uncontrolled descent. Adding a parachute would increase the time taken - and may cause the message to drift off target - but would protect it from impact damage. It is safe to say that a message could be sent from the top of the tower to the bottom in much less time than the opposite direction.

What about uplink? The messengers are not climbing vertically - they're walking a spiralling passageway up the tower. A man burdened only with a scroll or messages could carry up a reply in 6 weeks - 42 days. Let's be generous and say an 84:1 ratio between uplink and downlink.

Priests at the bottom of the tower want to be able to rapidly send messages to those at the top.

There are three main ways to reduce the latency.

Let's take a quick look through all three methods. Do be aware, this is somewhat of a Spherical Cow problem!

At first thought, this would seem to be the obvious solution. Place a pulley at the top of the tower - and raise the messages that way. This method of raising heavy loads was well known in ancient times. Sadly, it isn't as simple as that.

Rope has weight. Depending on its strength, it could be up to 1Kg per metre. That weight attached directly to the top of the tower would cause serious structural instability. Even ultralight carbon nanotubes aren't suitable for such long distances.

Perhaps a series of winches could work? It could be slow going transferring from one rope to another, then there's the issue of mechanical breakages.

It is a possibility - but using humans seems a lot more simple and reliable.

We have some data for running up tall buildings - in the shape of Vertical Marathons. The fastest sprinters are able to climb the stairs of the Empire State Building in about 10 minutes. That's 450 metres, so 0.75 metres per second.

Scaled up linearly to the height of the tower.

Hmm... Perhaps we could combine ropes and runners. Would it be quicker to climb a series of ropes?

The world record for rope climbing is held by Ross Edgley. In 2016 it took him 24 hours to climb Everest.

Ah, climbing vertically may be a shorter distance than walking up a tower, but it is demonstrably slower.

My first thought was that it would be possible to use semaphore and telescopes to achieve low-latency communications. The optical telescope wasn't successfully developed until the 17th Century. Even if basic optics were developed, it is likely that clouds and other atmospheric phenomena would impede reception of information.

What about audio? Shouting probably isn't going to be successful - but there are other ways to transmit sounds. 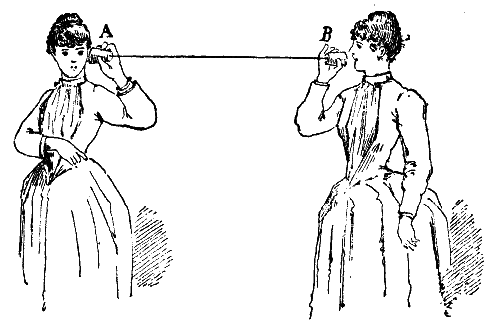 Mechanical telephony is fairly simple. You may be familiar with the tin-can phone - a length of string with a tin-can at each end. Although developed around the same time as the telescope, there is nothing fundamentally stopping mechanical telephones from being developed by any society with basic metalworking and rope-making skills.

Currently, the longest tin-can phone is around 200 metres. To climb the height of the tower would require about 400 relay stations - staffed with people to listen to the message, and then retransmit it to the next one.

Let's assume that it takes a minute to transmit a 10 second message to the next relay. That's still under 10 hours to get a message to the top of the tower. Practically instantaneous compared to physically carrying a scroll!

I am fascinated by the idea of how our history could have developed.

A few years ago, I wrote a post asking why the Romans hadn't invented semaphore. The development of an optical based "Internet" would have naturally led to the invention of a whole host of communications technologies.

Similarly, Ted Chiang's story touches on some of the inventions necessitated by building the tower - mostly structural engineering and agriculture.

Let's imagine what other technologies would have to be invented by a society who wished to communicate with those working at the top of such a tower.

Even if a mechanical telephone wasn't practical, communication would still require the development of several fields of science:

What I find infuriating is that the majority of these scientific advancements don't require much physical technology. It is knowledge waiting to be discovered - requiring only a challenge to make it practical.

What advancements are just waiting to be found for want of a challenge?

One thought on “Asymmetric Latency”