Perhaps the most legendary piece of plastic in the hacker community is the humble "Cap'n Crunch" whistle. The free-in-cereal whistle was able to emit a piercing shriek at 2600Hz - the exact tone required to unlock the US phone network.

So, because it's all I seem to do these days, I turned my my trusty RepRapPro and decided to see whether it was possible to 3D print a whistle which could produce the same frequency.

I found a customisable whistle on Thingiverse and customised it to include the Over The Air hashtag.

Rather than do any funky customisations with radius or length, I simply scaled the whistle in Slic3r.

The print wasn't without issues. Because of the large opening, the top layer didn't seal properly - even on the smallest print.

The logo printed reasonably well - and the holes in the side were easily sealed with my fingers. But I might adjust the model for a thicker top layer.

The models come with an integrated "pea". The little ball in printed inside the barrel - a hard poke with a sharp stick set the ball free.

So, how did it sound?

Not bad! We broke out a tonal analyser on a smartphone and, on the smallest whistle, I managed to just about hit 2600Hz!

The 3D print is rather rough and was quite harsh on the lips - so it's worth sanding the final print down or rubbing some acetone on it before blowing.

Now, obviously, this doesn't look exactly like the original whistle. There are no 3D models I could find - although there are several rather detailed photos. 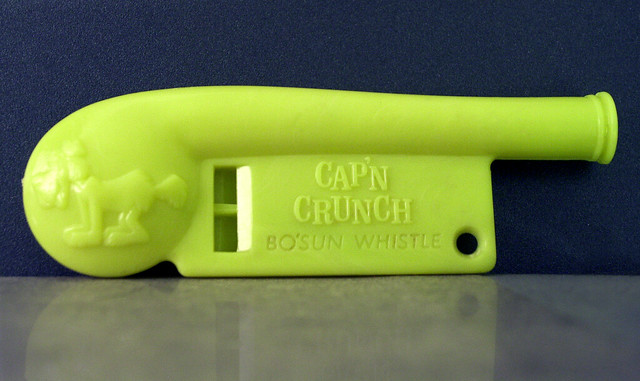 For my next step I can go one of two ways. Either refine the existing whistle so it reliably produces the 2600Hz tone - or try to make a replica of the bo'sun whistle and then get that pitch perfect. Thoughts?

Oh, and the tone is really loud and annoying for anyone nearby!