A couple of years ago, we had solar panels installed on our roof.

We based our power generation estimates on the Europa Solar Calculator which estimated that they would generate around 2,700 kWh per year.

Every few months we take a reading and see how the panels have been performing.

Let's put that into context. The average UK domestic household uses around 4.6MWh per year. Naturally, there's a lot of regional variation in usage, and usage is dependent on how many people live at the property etc.

Last year, our solar panels 3172 kWh in total. That's around 2/3rds of the average yearly usage.

Ovo Energy provide me we a handy comparison of our energy usage.

Of course, domestic energy use is spread throughout the day - while a tumble drier and fridge may be running while people are at work, during the evening games consoles, cookers, TV, and lights are all in use.

Around half the total was generated in the Summer. That's slightly unfortunate. Electricity usage tends to be higher during winter. Not just because heaters are used - but because longer nights mean more lightbulbs burning and more evenings in front of the TV rather than at a barbecue.

There is a whole load of data about electricity demand in the UK on Gridwatch.

It clearly shows that electrical demand drops in the late evening, and demand spikes in winter. 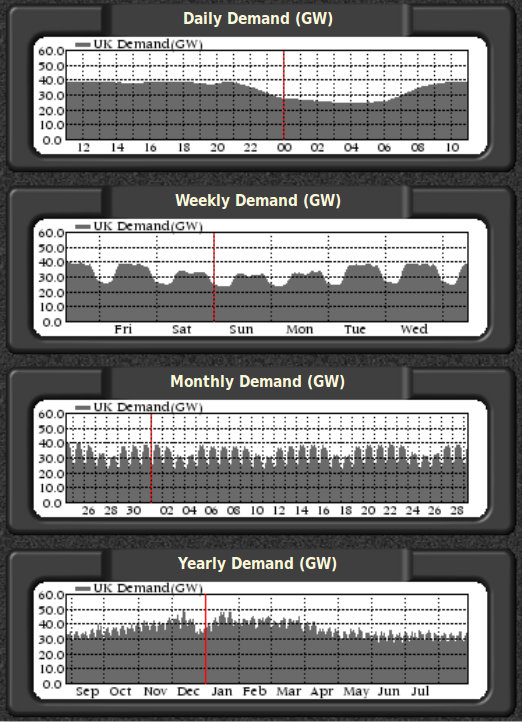 There are around 23 million occupied UK households in England and Wales. Assuming on average they generated half of what we're getting - call it 1,500kWh - the total generated per year would be 34TWh.

That's set against the UK's annual consumption of 344TWh. So, roughly 10% of our total needs could be met if every house had solar panels. That doesn't include businesses having them installed, or sheds, barns, and fields.

It costs roughly £7,000 to install solar panels on a normal domestic property. That's roughly £160 Billion - considerably less than the Government's proposed £250 Billion subsidy for Nuclear Power (which doesn't include clean up costs).

Solar and other renewable aren't intended to provide all our energy needs - not until we can perfect energy storage - but they're great for reducing the load on our grid, distributing energy production, reducing our dependencies on foreign fuel sources, and protecting us from environmental disasters.

We could create hundreds of thousands of jobs throughout the country, reinvigorate British manufacturing, and reduce our electricity bills - all for less than the cost of a giant industry subsidy.

The technology is there, we just need a Government which is planning for the long term rather than for the next election.

2 thoughts on “The British Summer Generates 1.5 MegaWatts Per Roof”