The BBC is reporting that the Government is so afraid of prisoners having access to concealed mobile phones, they want to introduce a ban.

A government spokesman told the BBC that it was discussing the issue with the National Trading Standards Board and the Serious Organised Crime Agency.

It follows a report by the Times suggesting some of the Chinese-made products were being advertised with prisoners in mind.

Having a mobile phone in jail is a criminal offence.

The article goes on to conflate a number of issues. As well as the illegality of having a phone in prison, there is the trading standards issue that some of these devices have unauthorised logos on them!

How exactly does one go about banning tiny phones? Two years ago, I reviewed the S16 watch phone. As the name suggests, it's small enough to comfortably fit on one's wrist.

A large percentage of the size is taken up by the touchscreen and the bulky battery. Since I reviewed it, sizes have shrunk dramatically - as have prices. You can now pick up a wrist worn phone for around £30. 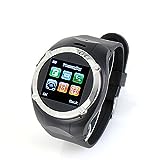 Is the Government really going to try to introduce a ban on technology under a certain size? Or technology which looks like some innocuous other item?

Or is this just some sabre rattling to make people thing "well, at least they're doing something!"