Another year - another OpenTech! See blog posts from 2010 and 2011.
It feels like every year the event gets bigger and better. It's still the same crowd of politically aware techies, and it still costs a ridiculously cheap fiver to come along, and the talks were of an abnormally high quality.

Here are my thoughts from the day.

Fascinating talk from Lisa Ma about living and working with workers in a Chinese joystick factory.

Raises interesting questions about how we treat workers in terms of resources, and whether urbanisation is seen as a universally good thing by young people.
It got me to thinking about how we treat factory workers compared to how we treat animals. It's now a badge of pride for cosmetics to carry a label reading "Not Tested On Animals." Following the recent disasters in Bangaladesh, should clothes carry a "No Sweatshop Labour" tag?
Or, perhaps as Rob Manuel suggested, shops should publicly display how much tax they pay.

@edent and a x% of purchase price will be paid as tax to HMRC label?

@edent print the CEO to employee salary ratio on the tags.

There's a great interview with Lisa at VisionOnTV

Putting Your House on GitHub

What if you put all your niggling household issues on a bug tracker? Superficially, a very entertaining talk by Francis Irving - but raised a serious point about how we communicate with tradespeople.
Why can't I put a big list of jobs out to tender and let plumbers and electricians compete for my work?
I asked him about the security aspect of the project. In open source software, it's usually considered polite to raise a security bug in private before disclosing it to the wider world. You wouldn't want to raise a public bug which read "Burglar Alarm Broken", would you?

Another great "what if" made real. What if you were to gather all the versions of countries' constitutions up in one place? What would a searchable database be like? What lessons can we learn?
Given that most countries constitutions change over time, and most changes are done by non experts in the field, this could be a very valuable resource.

This taxonomy of constitutional issues is anthropologically problematic. Relies on eurocentric assumptions. But totally fixable. #opentech

It also touched on the limits of crowd sourcing from the general population. When very dense legal language is involved, it is usually best to get experts to decide what it means. Of course, that's also an argument for having laws written in plain and unambiguous language.

The GOV.UK team have gone from a twinkle in the eye of some techies - to a fully fledged team kicking arse in the heart of the Civil Service.
Of particular interest to me was how they managed a complex redirection project as they closed various sites. Certainly not for the faint hearted.

Also interesting was the tales of some of the internal difficulties they faced. Including some "interesting" thoughts on Open Source.

CESG tech dir: "If anyone in UK government says CESG has banned open source send their name to me and I'll have them killed" #opensource13

I asked an awkward question about their priorities. The DWP site only works on IE6! That means trying to claim benefits if you have a modern computer or browser (or even an old Mac or Linux box) is impossible.
The problem, as I understand it, is that contracts have been signed which mean making even simple changes comes with a high cost. As we've seen with PFI contracts in hospitals, the initial cost can seem attractive but outsourced companies with a strong profit motive will screw you over without providing any real benefit.

Another interesting question was asked about the "dumbing down" of content. Firstly, the pages link to the relevant legislation if you really want the nitty gritty detail. Secondly, nerds aren't average users. Average users tend to skim pages rather than reading them comprehensively. Given the average reading age in the UK is 12 (that's a hugely problematic statement, BTW) it's important that the information on the pages is as clear as possible.

I can't begin to describe how incredbly proud UK citizens should be at having such an amazing team reshaping the Government's digital portfolio.

The Bill and Gavin Show

Oh, look, just read Bill's talk and be enlightened.
Given that the punk music revolution is now being used to sell cars and butter, how do we stop the digital revolution from being hijacked in such a way? One suggestion is to "weaponize" openness. Can we have a "Creative Commons MAX" licence which promises extreme legal retribution for violators? Can we create Open Source licences which prevent evil being done in our name? I suppose GPLv3 is an attempt at that.

Gavin Stark's talk on Open Data gave me a thought about the ongoing issues with privatizing the PAF (that's the data which makes up the UK's PostCode system). Several years ago, I suggested that mutual ownership would be preferable to privatisation of the Post Office - could the same be true of PAF? Would enough techno-utopians be able to club together to run PAF in an open and sustainable way?

I've been thinking a lot about political donations and "political donations". It seems that some people are able to influence the legislative process by donataing modest sums of money, and giving favours to politicians. Other people would call for a database of lobbyists, or some form of push notification service for whenever your MP receives a bribe donation. Not me. I want to make a crowd sourcing site to help you influence your MP.

(Many thanks to Alex Blandford for the name suggestion.)
Yes, this talk is (mostly) humorous satire. I haven't really built "KickbackStarter" - although the mood in the room seemed of the opinion that it would be a viable idea. More than a few people came up to me afterwards and asked if they could help get it started. I think they're all crazy...

Permit me to indulge in some vanity over the feedback and photos I received.

@edent is giving a great talk proposing KickbackStarter to donate to MPs 'when they vote the right way' #OpenTech pic.twitter.com/mJzCIdpDby

@edent makes a fab point abt the nonsense of MPs and who runs the country. Now this is a question .. do MPs take Bitcoin #opentech #A5

.@edent have you seen http://t.co/HPHQ33s4d6 for a related concept and proposed fix in the USA? #opentech 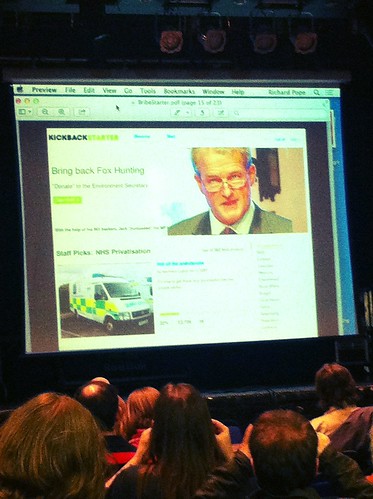 Thanks to VisionOnTV for conducting this interview with me.

Only 17% of the STEM workforce is female. 2/3rds of female STEM graduates don't enter the profession. 50% of technology customers are female. See the problem?

Three very different speakers talked about how they were helping encourage more diversity in technology.

Firstly Stemettes is showing young women positive role models of women in science and technology. They're showing parents that their daughters can find a rewarding and useful career in computing.

Flossie is a project to get more women involved in the open source movement. They have a conference coming up in November. If you're a woman and want to present - give them a shout. Men are welcome at the event, but not as speakers. Given the aims of the project, I think that's fair enough.

We hear a lot about how being a straight white male is like playing life on the easy setting, but this was the first time I'd seen someone talk through practical steps to include more people.

I especially loved her remark about tolerance. No one wants to be tolerated - you only tolerate things you hate. If you're talking tolerance, you're essentially saying "I dislike you and have to put up with you." No one wants that.

I highly recommend having a quick read of her deck.

One of the great things about OpenTech is that all the talks are audio recorded. I think, if possible, they should be videoed as well.

There were lots of people I knew - albeit some only digitally

Thirty seconds after arriving: "You're Jonty, I recognise your name from twitter!". I had forgotten #opentech is essentially internet LARP.

I wonder what the "newb" diversity is like. Are we just preaching to the choir?

Gender diversity of participants seemed much higher than a "normal" conference. Why is that? 10 speakers out of ~40 were female - perhaps that encourages more attendees. Or, is it the fact that the conference is cheap and held on a weekend?

Huge thanks to Sam Smith and his merry band for organising. For all the speakers and attendees for putting such wonderful thoughts into my head, and to everyone who chuckled along at my jokes.

Same time next year? You bet!