The photo on the left is me just pointing my Galaxy Note II at the sky – the one on the right uses the same phone, but with a bit more kit…

Last year, I bought myself a small telescope as a birthday present. 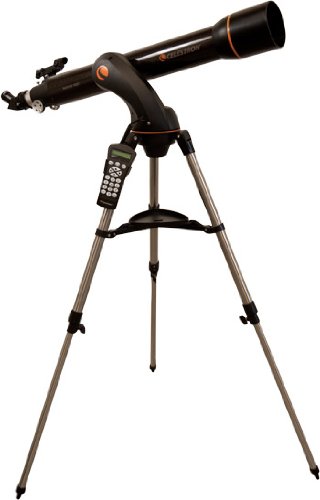 I wanted to use it to take photos of the moon. I like the moon.
The problem is that putting the phone up to the lens of the scope is really tricky to align. Which makes taking good photos really tricky.

So, I picked myself up one of these.

It’s a Revelation Universal Digiscoping Adapter and a Revalation Universal Smartphone Grip. It’s a fiddly bit of kit but you put the lens in one end, screw it on, grip your phone in place, and try to align the two.

Step 1 – attach all the bits and then screw the phone securely.

Step 2 – Add the lens and fiddle until they’re perfectly aligned.

My first attempt at Lunar Photography was somewhat hampered by a lack of decent alignment.

I rijigged everything, found the moon in the eyepiece, attached the digiscope and…

Ah, yes, because of the difference between my eye and the camera, I had focussed on the foreground tree rather than the moon.

Setting the phone to “macro focus” and twiddling with the telescope’s focussing knob produced this.

I then adjusted the exposure so the phone’s camera wasn’t overwhelmed with light.

I moved the telescope and waited for the moon to come out from behind a tree. That way, I could capture the whole thing without interference.

I then digitally zoomed in and got these beautiful shots. Click for full resolution.

I swapped out for a higher magnification lens.

This is Tycho – the most prominent of the moon’s craters. I didn’t pick up any unusual magnetic readings 😉

One of the problems with the digiscoping adapter is that it is quite heavy – especially with a Galaxy Note II attached. The weight was enough to push the telescope of its carefully aligned axis – so I ended up holding the viewfinder up manually. This lead to some shakey shots. As you can see from this video – it’s was rather hard to keep the camera still while taking a photo.

Overall, I’m really pleased with the whole setup. Getting the lenses aligned is a pain – and I need to find a way to compensate for the weight of the adapter and phone.

I just used the stock camera, I’m aware that if I’m trying to shoot more distant objects I will probably want something with a much longer exposure.

But, for a first attempt, I’m over the moon 🙂