The phrases is, I think, a contender for a new form of Godwin’s Rule. Any discussion about laws eventually boils down to “Only a criminal would oppose this measure.”

The annoying thing is, it’s particularly hard to refute. In some cases, yes, it may be felt that the law unfairly criminalises behaviour which one currently engages in. Most people, however, argue from theory. The Pirate Party has a nice little primer on objections to the argument.

Wouldn’t it be nice if there were some practical, real world, examples of how having “nothing to hide” can still be dangerous?

The Government wants to introduce the Communications Data Bill (AKA the Snoopers’ Charter). There has been a Joint Committee investigating these proposals – as part of their investigations, they reported:

191. It is not only the public authorities which make errors. The annual report shows that in two cases a CSP disclosed incorrect data in response to a request, the police took action on the basis of this data, and members of the public were wrongly detained and accused of crimes.
Draft Communications Data Bill Joint Committee Contents – 5 Safeguards

So, there we have it. People with nothing to hide caught up in a dragnet of incompetence. Here we have highly responsible state bodies unable or unwilling to verify data correctly – the fall out is that innocent people have their lives severely disrupted

If this bill passes, every single email and text you send, every website you visit, every link you accidentally click, will have its details recorded in a database somewhere. It will then become trivial for the CPS to trawl this vast mine of information looking for anything they regard as “suspicious”. And if they mistakenly arrest you because of their deep-grained institutional ability to cock-up – or if they dislike your legal hobbies? Well, that’s just too bad.

That’s why I support the Open Rights Group – and you should too. They’ve submitted statements to the Joint Committee, they’ve tirelessly briefed the press, and are organising a citizens’ lobbying of Parliament.

ORG want to fund a part-time Legal Officer to help them with their work – they started with a goal of getting 150 new members, now they are only 30 people short of their target. They need you to join for just £5 per month. 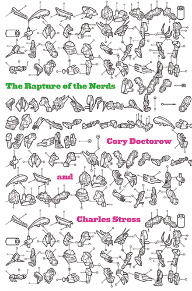 Every supporter donating at least £5 per month by direct debit receives a free copy of Rapture of the Nerds co-authored by Cory Doctorow, a member of the Advisory Council and Charles Stross, one of ORG’s founding members.

NB – the affiliate style links are for ORG’s member-get-member program. If you’d prefer to join without giving me as the referrer, please use http://www.openrightsgroup.org/join/.