Buy fresh wasabi in the UK. It's amazing

Fresh Wasabi? In The UK

When I was at university, I moved into a shared student home with Liz (spoiler she became my wife several years later!).

Liz was, and still is, quite the cook. However, her range of culinary equipment dumbfounded our house-mates. I once came in to the kitchen and witnessed a blazing row between her and someone who had the temerity to grate cheese in a nutmeg grater. 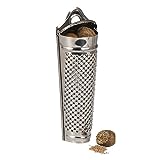 I now know that, not only do they exist, they are especially poor at grating cheese.

This, of course, became a rich vein of comedy. Whenever Liz asked me to pass her a cheese grater, I would pass her the nutmeg grater! Hilarious! Ten years later and I'm still doing it.

It must be hell to live with me...

Anyway, a few years ago, I decided to buy Liz a present. Just one of those cheap "thinking of you" gifts which I periodically buy to remind her that I'm not a total dolt. I ended up in Muji and found, nestled among the kitchen tools, a wasabi grater.

Not only was it a funny gift - something new to pass her when she needed to grate Parmesan - but practical, too! All I needed to do was find an Asian supermarket which sold fresh wasabi. Easy, right?

Turns out, nowhere outside of Japan sells wasabi. The wasabi paste we buy in this country is mostly horseradish and green food dye. The plants just don't travel well. Turning to Wikipedia....

Few places are suitable for large-scale wasabi cultivation, and cultivation is difficult even in ideal conditions.

So, for years the Oroshigane gathered dust at the bottom of a kitchen drawer. Occasionally seeing the light of day to tackle a particularly hard cheddar.

While flicking through the TV channels one morning, we happened upon some morning cookery show. The host started talking about wasabi.

"Hah!" said I, "They won't be using fresh stuff. It's impossible to get in this country."

The smarmy presenter looked into camera and said "We're using fresh wasabi which has been grown in Dorset."

Some £15 later, this arrived on our doorstep.

A full rhizome of wasabi. Enough for 6 people, so the company reckons. At £2.50 per person, it's not the cheapest condiment in the world. But, what does it taste like?

It's not quite as elaborate as a tea ceremony, but the wasabi has to be treated carefully. The instructions say it must be refrigerated as soon as it it delivered. (Ours spent the night in the sorting office and doesn't seem to be any the worse for it.)

The wasabi must be kept damp, wrapped in muslin, and stored in the fridge.

When needed, trim the end off, and scrape away the hard skin on the side. We used a standard potato peeler.

Then, grasp your Oroshigane and grind in a circular motion to create a fine paste.

(Thanks to Kevin Anderson for the photos.)

Interestingly, the colour of the paste was a pale pink - rather than the luminous green that most fake wasabi is.

Finally, serve to friends with sushi.

Even before the grinding, I could smell the wasabi's pungent flavour. Once the end was trimmed off our noses lit up. A simply heavenly scent.

But the taste... Oh! The taste! Words can't conjure up the magic of the flavour. Initially, it wasn't as aggressive as the pseudo-wasabi served by most restaurants. But it built in flavour and heat gradually. I didn't take enough to make my eyes water, but I could feel the potential behind it. The taste faded quickly, it didn't seem to linger much after swallowing.

Is it worth it, though? Is it that much better than the shop-bought horseradish-and-preservatives pseudo-wasabi?

I suppose that it's the difference between serving Moët & Chandon and supermarket champagne. They both do the job of flavouring the sushi perfectly well - but if you care about food, you owe it to yourself to grind fresh wasabi at least one.

Buy fresh wasabi in the UK. It's amazing

4 thoughts on “Fresh Wasabi In The UK”