I had a great time at the Homeless Hackday. This is a belated write up, because I wanted to let a few thoughts peculate. 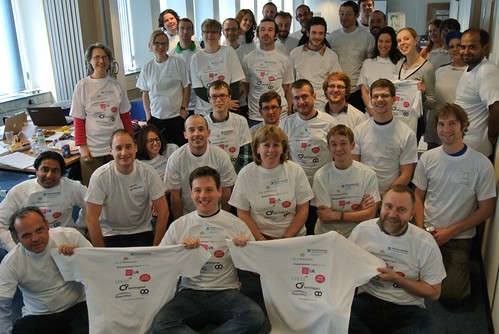 There has been a worrying rise in the number of people rough sleeping - especially in the capital. There are a number of charities and Government departments which are available to help people who are homeless.

They wanted a smartphone app / mobile web site which would help tackle homelessness. Either by helping people people directly or by allowing members of the public to get homeless people the support they need.

We quickly ran in to some language barriers.

It becomes very tricky to find a neutral way that conveys to a user what the app is for, while still respecting the dignity of the homeless.

We came up with an elegant solution. A simple mobile website which would geo-locate the user, allow them to input basic details about the homeless person they were trying to help, and then pass that information on to the council.

I coded up the donation part of the service. Using ImpulsePay, I was able to create a two-click donation form. The payments are processed by your mobile network provider, so there's no need to type in any credit card information.

I also used jQuery to build a slider - this encouraged playability. A user can slide the bar to see what their donation will buy. This allows them to get a more personal sense of where their money is going and (hopefully) encourages them to donate more.

We received one piece of negative feedback which, on reflection, I think exposes one the inherent tensions in a hackday. I'd suggest reading both Thayer Prime's blog post and Emma Mulqueeny's blog post for some eloquently expressed thoughts about what Hackdays are and are not.

The Homeless Hackday was very up-front with developers with regard to intellectual property rights, and what was expected of us. What I'm less clear on was whether all the agencies who came understood what the purpose of a Hackday is.

During the building of the hack we were asked several times "oooh! Could you add....?" The answer to which is "Yes, given sufficient time and budget!"

In any project there's a dilemma concerning the amount of time allocated between planning and building. The crux of a Hackday is to keep the scope extremely limited. It should be possible to show how the product could evolve, but that doesn't mean building it or even taking it into account when designing.

On demoing the mobile donation part, the immediate feedback was

How do you determine the recipient of the donation? Not every charity is a good one - and some hinder rather than help.

That's a very fair question - but it leads to a complicated answer which you can't easily give in a 3 minute demo.

More than that, it assumes a huge amount of subject knowledge. The majority of developers came to the Hackday with zero sector knowledge and had to pick it up in the 8 hours they have to hack.

The politics of the situation is totally outside the scope of what anyone can be expected to build.

Furthermore, any hackday demo is - almost by its very nature - conceptual. It almost certainly won't deal with edge-cases, deviations from the happy-path, or even having two people use it simultaneously!

A Hackday demo is axiomatically a demonstration of a quick hack. It shows you what could be possible given limited information and minimal coding time.

Overall, the Homeless Hackday was a great experience. It took me out of my comfort zone, made me engage with an issue to which I previously had given very very little thought. It was wonderful working with people dedicated to helping those less fortunate.

In many respects, it was the perfect Hackay. A well defined problem, a solution which could improve the lives of many people, and a good set of data to work on. And the requisite amount of pizza and cake.

I just wish that the limits of what a Hackday can produce was made clear to everyone involved.

One thought on “Homeless Hackday”