Last year, I suggested that TfL should use QR codes to point to their excellent mobile countdown service.

Looks like someone was listening! I spotted this poster at a tube station. 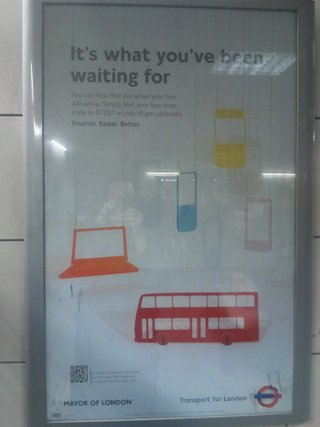 Nestled in the corner is a QR code pointing at the mobile bus countdown service!

This is a close-to-perfect use of QR.

As I suggested in my original post, TfL could customise the code, or print a separate one for each bus stop. This is, however, an excellent start.

What’s particularly useful is that TfL are using the goo.gl URL shortener – meaning we can see their statistics!

There’s a dearth of good quality QR statistics which are publicly available. What is available is often put through the lens of a marketing team. So it’s particularly refreshing to get the data straight from the source.

One simply needs to append any goo.gl URL with a “+” in order to see the statistics.

Since their launch in November, the QR codes have been scanned 4,500 times. I don’t know how many of these posters are up, but that seems like a pretty impressive number.

The graph from the last month shows the codes are being scanned around 70 times per day. 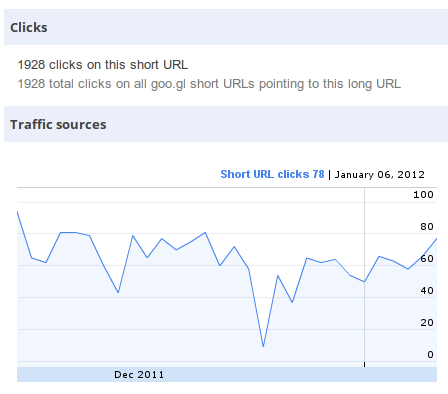 We can get a rough idea of what sort of phones Londoners use – or, at least, what those who use the buses use.

iPhone takes a significant chunk – although not the majority – with 45%. Android coming next at 28%. BlackBerry still has a strong showing among Londoners with 22%.

I’m unsure whether “Windows” is WP7 or the older “Windows Mobile”. Either way, Nokia’s market share has collapsed.

The next interesting thing to look at is which countries the users are from.

As expected, the majority are using UK SIMS.

This doesn’t count visitors who are using a local SIM on their stay – but it’s still interesting to see where tose whoa re prepared to pay roaming data charges are coming from. Who knew so many Lithuanians loved our bus system…?

As far as I can tell, the Google statistics don’t actively prevent duplications – so one enthusiastic Lithuanian could have scanned the code 15 times.

The data aren’t entirely rigorous – but do show some interesting trends for QR use in London.