In my quest to find the perfect phone, I was recommended to try the Motorola Pro Plus by Seb Schmoller.

This is my attempt to review it fairly after a week of usage. Some people have accused me of being unfair in my review of the Nokia Lumia. I think I was harsh – but all of the problems I experienced were real. This review of the Pro+ is unvarnished – I paid for this out of my own pocket and am beholden to no one.

Almost the perfect form factor. Let down by buggy software and a laggy processor. Excellent keyboard, average screen, but constant reboots means I’ll be sending this phone back to see if it’s a fault across all the devices, or just mine.

Because this is an unusual and somewhat rare device in the UK, I’ll let you have the tech specs first.

On paper, it is underpowered compared to the latest multi-core phones. I’m coming from a Samsung Galaxy S which, nominally, has a similar processor and the same RAM. So it has been interesting to see how fast it “feels”. Honestly? It’s slower than the original Nexus from a few years ago.

It looks like an elongated BlackBerry. The keyboard is of the same design, the back has the same tactile feel, even the charger is on the side – just like a ‘Berry. 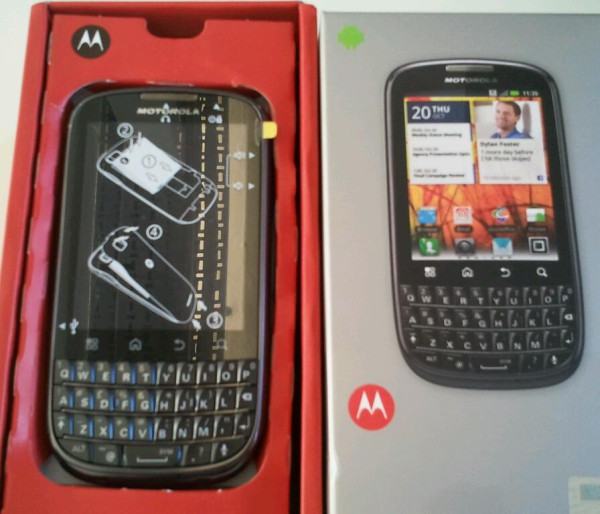 It comes with the requisite USB cable and plug, as well as a pair of headphones, and a minuscule instruction leaflet. So, I stuck it on charge for a few hours (as suggested) and then let rip…

A few times I touched the screen an waited for a keyboard to popup. It took me a few moments to realise my mistake. Once you get used to it, the keyboard is close to perfect. I installed SwiftKeyX to make the typing suggestions slightly better.

The UI feels slightly “toy like”. Motoblur really is dreadful and shouldn’t be foisted on customers. Replacing the homescreen with something like ADW Launcher makes the interface so much better.

Graphics and scrolling is very laggy. It’s only 480*640, so it’s not pushing a lot of pixels. When scrolling through web pages I found that music playing in the background would stutter and freeze.

You won’t be playing many 3D games – even if the processor wasn’t so crushingly slow, the screen is a bit too cramped for anything immersive.

For web browsing and – crucially – writing emails, this device is a champion. When it doesn’t crash.

The big problem with the Pro+ is that it randomly reboots. I don’t mean certain software crashes, I mean that the device spontaneously hangs, and the whole phone reboots.

I’ve pulled off the panic logs, but I don’t know what’s causing it. I’ve reset the phone several times but it still occurs. This appears to be an isolated problem with this unit – so I’ll be returning it to see if another one exhibits the same problems. 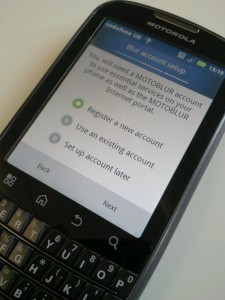 *sigh* Moto Blur. Seriously. Handset manufacturers should stick to making hardware. Trying to tie me in to your ecosystem by way of yet another username and password? No thanks. I learned my lesson when Nokia Ovi closed. And when Vodafone 360 swallowed my data. And whatever ridiculous service Sagem had. I’m not signing up to anything else. My loyalty to your hardware has to be earned – I won’t be kept to ransom. Especially when your service rarely works. 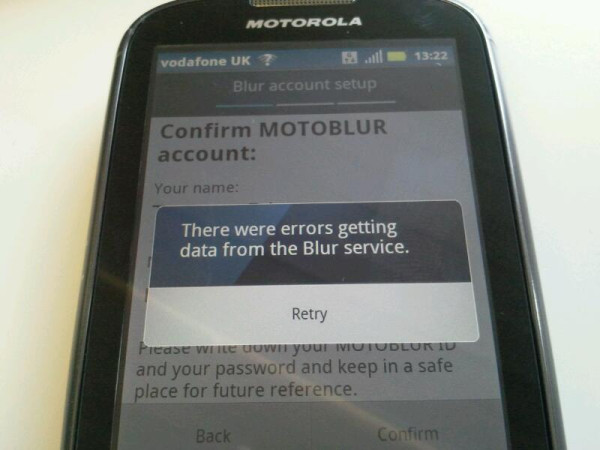 The keyboard on the Pro Plus is as good as any I’ve used on the BlackBerry. Fast, precise, and easy to enter symbols and numbers.
The only drawback is that it isn’t the BlackBerry keyboard – so the symbols are all in the “wrong” place. Take a look.

(Note, on the UK model that I have, the $ symbol is replaced with £.

I can understand why Motorola have made some changes, but it really does confuse this BlackBerry addict as to where the “correct” keys are. Why on Earth are ALT and shift swapped? I also question the need for a physical “voice recognition” button.

On a BB, holding down a key automatically capitalises it – on the Android, it gives you all the available accents. One of those little things which takes a bit of getting used to.

As an added bonus, there’s a wiggly red line spell check – so you know exactly how bad your typing is.

Apps like the browser also have keybaord shortcuts. Pressing menu+A adds the current page to your bookmarks – for example. Though useful, they’re subtly different from the Blackberry shortcuts, which may confuse some refugees.

The best feature is being able to page-down through a website by pressing the space bar!

I’m not a fan of how Android software updates happen. I think Motorola’s recent blog post explains some of the mystery behind the delays. What is annoying about the software on this device is that Motorola won’t say when or if it’s getting an upgrade. Their software update pages ignore it like the black-sheep of the Moto Family. Even the Motorola community forums don’t list it. This rather gives the impression that it is a stillborn device.

Because it’s not wildly popular, there’s no support from third party Android ROMs like Cyanogen mod. So far, there’s just a solitary thread on XDA Forums.

The camera is reasonably quick to start, and the flash is very bright. Sadly, there’s no way to switch off shutter sound. The camera is missing some of the fancier features of other phones like face detection – but it’s basically fine.

There’s a multi-colour notification LED which is very useful. 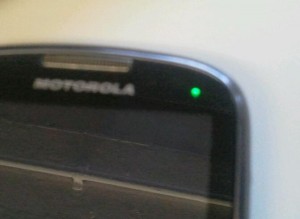 A front-facing camera is also built-in. Curiously, it’s not available for use. Wonder why?

I’ve used this device exclusively for a week. It has crashed enough that I am going to send it back – I hope this is just a problem with my unit though.

Ultimately, it’s almost enough of a BlackBerry to convert die hard RIM-fans – but it’s not quite powerful enough as an Android to turn heads.

The keyboard is a joy to use. I would quite happily suffer through the poor performance for the joy of typing on this thing.

The Motoblur customisations are shockingly poor. I’d rather have vanilla Android than this barely thought-out, cartoony interface.

If you need an Android with a keyboard, this is the phone to get. It’s fast enough for day to day use – and you’ll be able to play a few games on it. The screen is a bit of a let down, and general performance is a little sluggish.

For those BlackBerry refugees looking for their first taste of freedom, this is an excellent start.

Assuming it doesn’t keep crashing, how does it score on my perfect phone scale?
Pretty damn high. It should be faster, the screen should be AMOLED, there should be a lanyard strap, and the front-facing camera should work. The form factor is great and the screen isn’t too cramped – although there’s ample space to put in something larger or higher resolution.

For those using Linux, lsub shows

So shove that in your udev rules and you’ll be able to start developing apps.

Luckily it is trivial to root the Motorola Pro Plus – so mucking about with it is fairly easy. I do wonder if it will ever see the latest version of Android.

The camera click is annoyingly loud and cannot be switched off. To permanently disable it, get root on the device, then use

46 thoughts on “Review: Motorola Pro Plus”