Another weekend, another BarCamp.  This time the Fourth Annual BarCampBrighton.

The BarCamp was excellent.  A great bunch of people.  The venue was beautiful, but the lack of walls (and floorboards!) meant that sound bleed was a problem.

The problem I have with BarCamps is there are invariably two or three talks which I really want to see which have clashing timeslots. 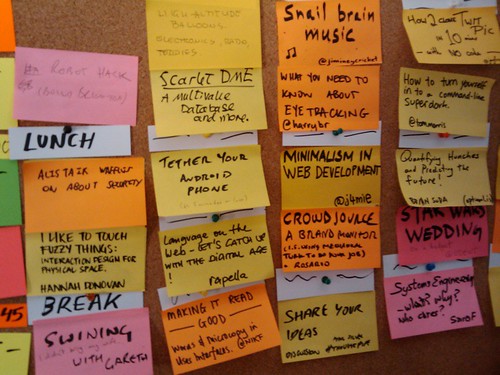 So, I decided to record the sessions I went to so that others could see them later.

I really hope that future BarCamps make it a policy to record every talk / discussion (where appropriate).  Think of it like a low-tech TED Talk.

I managed to get hold of a Flip Mino HD Camera. I'll put a review up later, but, briefly, it's a simple Point and Shoot cam which records in 720p.  Lovely.  It has a 4GB flash drive in it which gives a 1 hour recording time.  So a 30 minute BarCamp presentation is ~2GB

The only problem is.... THIS IS TOO LARGE FOR ANY ONLINE SERVICE!

YouTube - Will take files up to 2GB in size - but has a limit of 10 minutes of length.

BlipTV - Have a file limit of 1GB.  Annoyingly, they don't transcode to a lower resolution, so people with older machines won't be able to watch the videos. They do have a very nice FTP upload service.

DailyMotion - To upload videos of unlimited length, you need to become a "MotionMaker".  The process requires you to get approval.  I found that many of my videos just didn't work when uploaded to DailyMotion.

Vimeo - with a paid for "Plus" account, you can still only load 5GB per week.  If you want to use the free service, you're restricted to 500MB

So, I've had to spend ages transcoding the footage I took so it can be uploaded somewhere. On a slow machine it can take a long time to convert to a smaller video format - especially if you want to keep the sound in sync.  Uploading videos of several hundred megabytes is also painfully slow.

Here are the talks I went to. Enjoy!

Star Wars Wedding on a Budget