A small disclaimer. My mother & the author’s mother are great friends. I remember going round to play with Ellie when I was 7 and she was 8 and a half. Back then she towered over me with the intellectual and physical superiority that only children recognise. I was terrified of her.

Ellie Levenson has written a book about moden girls and feminism. Take a look at the cover of this book. Pink, winsome, girly. Everything that feminism isn’t. Right? 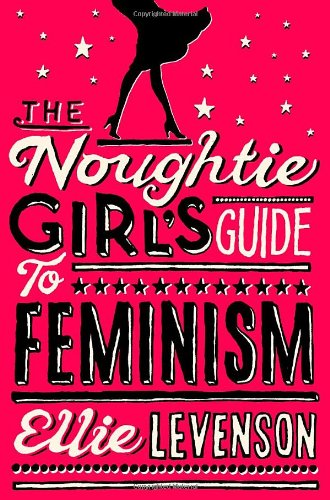 “The Noughtie Girl’s Guide To Feminism” is deliberately trying to look like “chick-lit”. It’s written in a style somewhere between that “worthy” article in Cosmo and a ranty blog. The language and ideas contained within are kept simple – but not simplistic. It makes the point that there’s no inherent contradiction between wanting equality for men and women and shaving your legs.

Now, that may not come as a surprise to you. You may be aware that lip-gloss and the right to contraception go hand in hand. Not literally of course, unless you’re on to the advanced stages of the Kama Sutra.

If you already think you are a feminist or have read any “real” feminist books, this book is almost certainly not for you. This isn’t Germain Greer – it’s better than that. More well reasoned? No. More academically rigorous? No. More correct in its understanding of what feminism is and should be? No. More accessible? Yes! Yes! Yes!

This a light introduction. Freed from the constrains of academia and without the need to be ferociously “right on”. I think that’s a good thing. It does, however, gently point the reader to some “real” feminist books and blogs – like The F Word. The book is sometimes contradictory. Occasionally hilarious. I found myself disagreeing with some of it. I’m aware that I’m not a “noughtie girl” and can accept that this book isn’t meant to change my mind.

Ellie points out that lots of feminists seem to prefer infighting to campaigning for change, that some groups are only interested in the academic theory of feminism. From the vitriolic reviews by some feminist women, I’d say she was right on the money.

“Noughtie Girl’s” is the sort of book you might slip to a young female relative in the hope that she’d take it on holiday thinking it was another pre-swim read. The chapters are easy to dip in and out of and relate back to Ellie’s life experiences. She’s been unjustly criticised for only presenting a white, middle class, heterosexual version of the world – she writes about what she knows. This book is written for people like her. It doesn’t get bogged down in the ephemeral – it addresses the practical concerns of her target audience. Is that so terrible?

In the olden days, we used to talk about “Consciousness Raising”. A subtle and entertaining way to highlight our causes to those who either didn’t know or didn’t care.

That’s where this book succeeds. The vignettes aren’t a polemic. They’re not moralising. They’re not telling you how to behave, nor what to think. They tell the young woman that it’s ok to want something better than she has. If she want to be paid the same as her male colleagues or to be able to walk down the street without fear of attack – that doesn’t contradict with wanting to get married or wearing pink high-heels.

If you’re looking for a gentle introduction to feminism, I highly recommend it. If you’ve already accepted feminism into your life – buy it for a friend who hasn’t. It will get more converts than placards, seminars and pamphlets.

One thought on “Book Review: The Noughtie Girl's Guide to Feminism”