[Disclaimer: This event was generously sponsored by Vodafone. I am a Vodafone employee but this post does not reflect the opinions of Vodafone. I helped arrange this sponsorship and am, therefore, highly biased.]

A quick review of MobileCampBrighton.

Brighton is such a delightful city that it's hard to begrudge it stealing one's Saturday morning lie-in. As I wandered the laines looking for The Skiff, I was worried about how successful this BarCamp event would be. It was the same weekend as the popular Convention on Modern Liberty and it was being held outside London. Added to my worries was the fact that I had convinced Vodafone to sponsor the event - if it didn't go well, it would be a personal and professional disappointment.

I needn't have been so worried.

This was the site that greeted me at the door.

The Skiff began to fill up rapidly. One usually expect about a 30% drop off in participants - especially at a free event - but I think there were more attendees than were anticipated!

Usually BarCamps have several sessions running at once. The advantages being that more people can present and group sizes are manageable. However, this often leads to a bit of confusion as sessions finish at different times and a bit of heartache as one has to decide between two equally compelling talks.

Due to the relatively small number of participants, we managed to do all the presentations sequentially in the one room. This would not have been possible - or desirable - at a larger unconference, but here it worked beautifully. 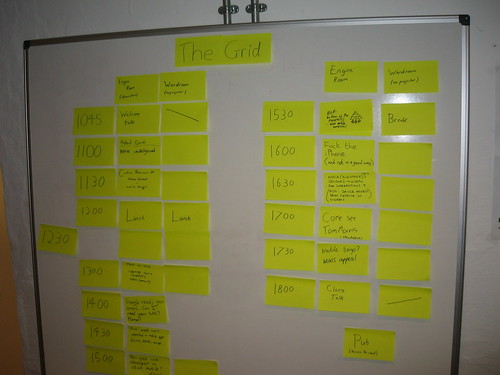 So, a brief run down of the talks I found memorable.

Ribot gave a talk on the "Emotion, Behaviour and Human Context" focusing on the power of sketches. As designers & developers, we often go for the big bang approach. Often it's more productive to paper prototype - it's faster and you'll be less emotionally attached to a "bad" idea.

Marten van Wezel gave us his experience of building successful communities. I'd never quite realised the strategies one needs to employ to keep a service pleasant for its users.

A good looking fellow called Terence Eden, basically rehashed his blog post about mobile contextual advertising and its inasivness. A good points to come out of the discussion was the need for VRM (Vendor Relationship Management). Something I'll be looking into closely.

Priya Prakash spoke about her research in to emerging market. This was an absolutley fascinating discussion about how different people use new technology. A choice quote was "if you want to see how people use technology, go to nail salons and cafes".

That most melifulous of speaker, Terence Eden snaked his way onto the board again to say "Fuck the iPhone (and not in a good way)". Regular readers will know of my distaste for Jobs' Toy, but this was a discussion about how the focus on cool new phones and gadgets basically ignored a large swathe of the population. While it's personally very exciting to develop for the cutting edge, we must not forget that the majority of people are on 18 month contracts and won't be able to get to our products for some time.

Tom Morris gave us his thoughts on making mobile applications and services more relavent by making them easier to develop. It's a good idea, but I still think the barrier to entry for programming (IDE, text commands, language paradigms) make it too hard for regular users to even think about programming.

Raul - a linguist - shared his experiences with how languages change to fit the digital landscape.

There were several other talks and I'll link to the Qik streams / videos when I find them.

The final event of the day was a "fastest text" competition. Marten van Wezel won Army of Two and Nik won Spore. Both prizes were generously donated by Jessica Gwyther, the Games Content Development Manager at Vodafone Group.

I really got a lot out of this camp - it's great to meet new people who aren't afraid to challenge your ideas.

You can view the back channel chatter on twitter (or Google's search for mobileCampBrighton if twitter is down...)

From a professional point of view, I felt that sponsorship was worthwhile. I got to demo our new products in front of a very intense audience and they gave great feedback. Hopefully I've left a good impression in participants minds about Vodafone and Betavine - if nothing else, they'll remember that Vodafone provides a decent lunch!

So, no post from me can end without criticism. This is no different, although it's aimed at organisers for all the BarCamps I've been to.

Overall - a highly successful MobileCamp. I can't wait for the next one!